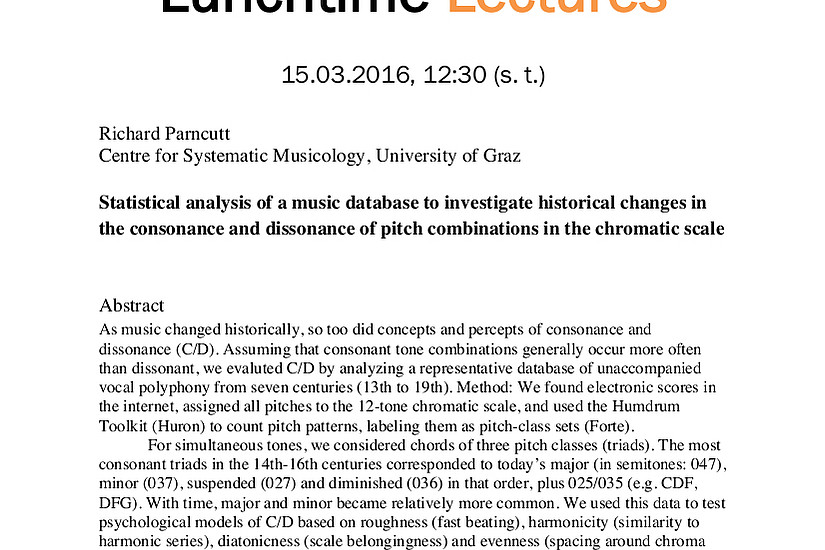 Abstract
As music changed historically, so too did concepts and percepts of consonance and
dissonance (C/D). Assuming that consonant tone combinations generally occur more often
than dissonant, we evaluted C/D by analyzing a representative database of unaccompanied
vocal polyphony from seven centuries (13th to 19th). Method: We found electronic scores in
the internet, assigned all pitches to the 12-tone chromatic scale, and used the Humdrum
Toolkit (Huron) to count pitch patterns, labeling them as pitch-class sets (Forte).
For simultaneous tones, we considered chords of three pitch classes (triads). The most
consonant triads in the 14th-16th centuries corresponded to today’s major (in semitones: 047),
minor (037), suspended (027) and diminished (036) in that order, plus 025/035 (e.g. CDF,
DFG). With time, major and minor became relatively more common. We used this data to test
psychological models of C/D based on roughness (fast beating), harmonicity (similarity to
harmonic series), diatonicness (scale belongingness) and evenness (spacing around chroma
cycle). Simultaneous C/D depended mainly on roughness, harmonicity and familiarity.
For successive tones, we considered tones that immediately precede and follow triads.
Profiles were remarkably independent of preceding versus following as well as century,
suggesting they were determined primarily by stimulus properties. We compared profiles with
psychoacoustic predictions and results of listening tests, and tested whether profile peaks
corresponded to chord roots, missing fundamentals, completion tones (to complete a familiar
tetrad), fifth-related tones, or diatonic tones.

Short bio of Univ.-Prof. Dr.phil. Richard Parncutt:
Richard Parncutt is a music psychologist with an interdisciplinary PhD in Psychology, Music
and Physics and an Honours (Master's) degree in Physics from the University of New
England, Australia, and a Bachelor's degree in Music from the University of Melbourne.
Since 1998, he has been Professor of Systematic Musicology at the University of Graz,
Austria and since 2009 he has directed the university's Centre for Systematic Musicology.
From 2015 to 2018 he is president of ESCOM, the European Society for the Cognitive
Sciences of Music. 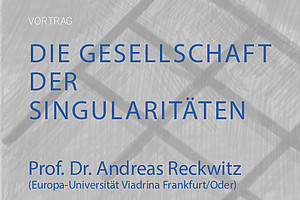 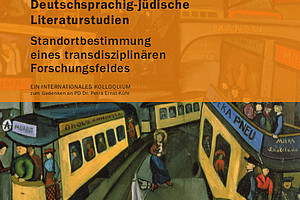 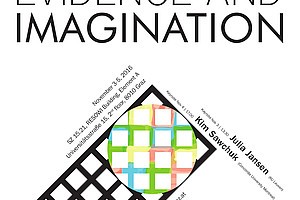